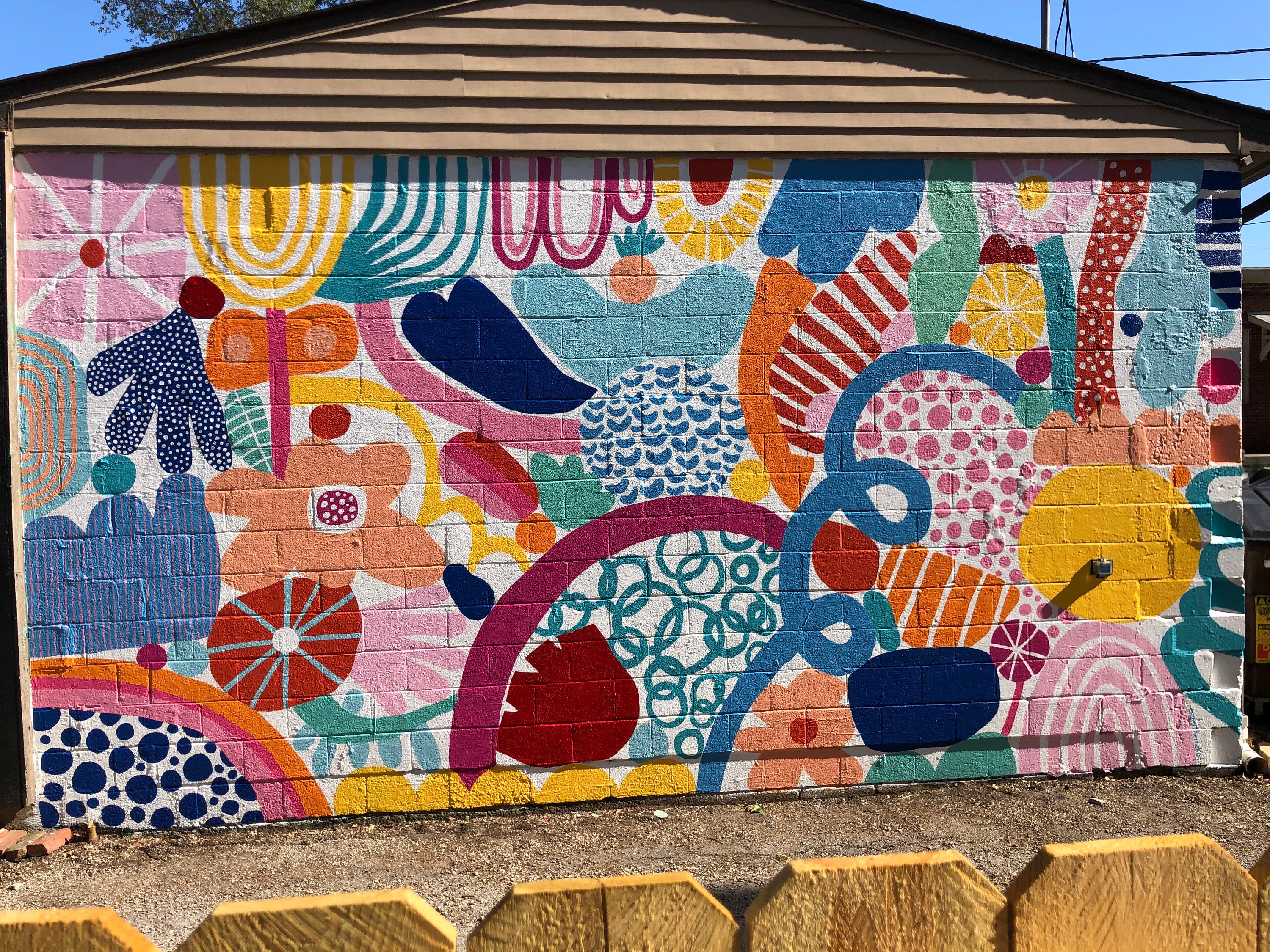 It's finished!! Hello friends, I can't begin to tell you what a journey this has been to complete this giant piece of art. Have you ever dreamt of doing something that you weren't even sure if you were really capable of doing?? Well, this was that dream for me. I have admired muralists and street art for as long as I can remember and would never imagined in a million years that someone would hire me to do it.

On my last blog entry I told you about the early part of the process, where I worked with Wild Cat Gift and Party creating a couple of digital sketches for them to pick from. Once the design was chosen, there was the obstacle of transfering the design to the wall. I chose to purchase a mini projector through Amazon to project my image on the wall and used colored chalk to trace the basic shapes. So on a Sunday evening after it was nice and dark, my husband and I went to the wall to transfer my image. We were greated with the suprise of a brand new fence that was built by the new homeowners who had just moved in to the house right next to the wall. This was a problem because I could not move back far enough to project my image to scale onthe wall. Back home we went and I broke my image up into four quadrants on my computer.

I decided to only transfer the bottom portion realizing we needed another ladder to elevate both the projector to line up the image and myself to be able to draw it. Also, working in the dark with chalk on a bumpy and uneven wall was more challenging than I anticipated. The next day I began my first day of painting, realizing some of my image had been cut off because the image had not been lined up properly. So from the start, I had to adjust my design and change things a bit to make my composition look more like my original art.

By the middle of the week I had finished painting the bottom of the mural, and it was time to face my fear of heights and climb on scaffolding. I decided after the issues I had with the projector not transferring, the top part of the design would be sketched in freehand. You guys I have to tell you that those hours I spent on the scaffolding were both nerve racking and exihilarating! I gripped that wall like my life depended on it, standing motionless for so long that my toes and legs would go numb! It was quite a commical thing to observe as many pedestrians walking by would scratch their heads and say- "You know you're really not that high up, right?"

After many design edits and two to three coats of paint on the wall, the mural was complete! I got to spend nine days painting a giant piece of art that I am so utterly proud of. My favorite part of the project was spending time with my mother who helped apply second coats to the wall and held the scaffolding still to keep me from freaking out. I will remember the memories we made doing this project together forever.  It was an amazing learning experience and I can't wait to do another! You can find the mural at 15 West Dunedin in Columbus, if you would like to see it in real life,